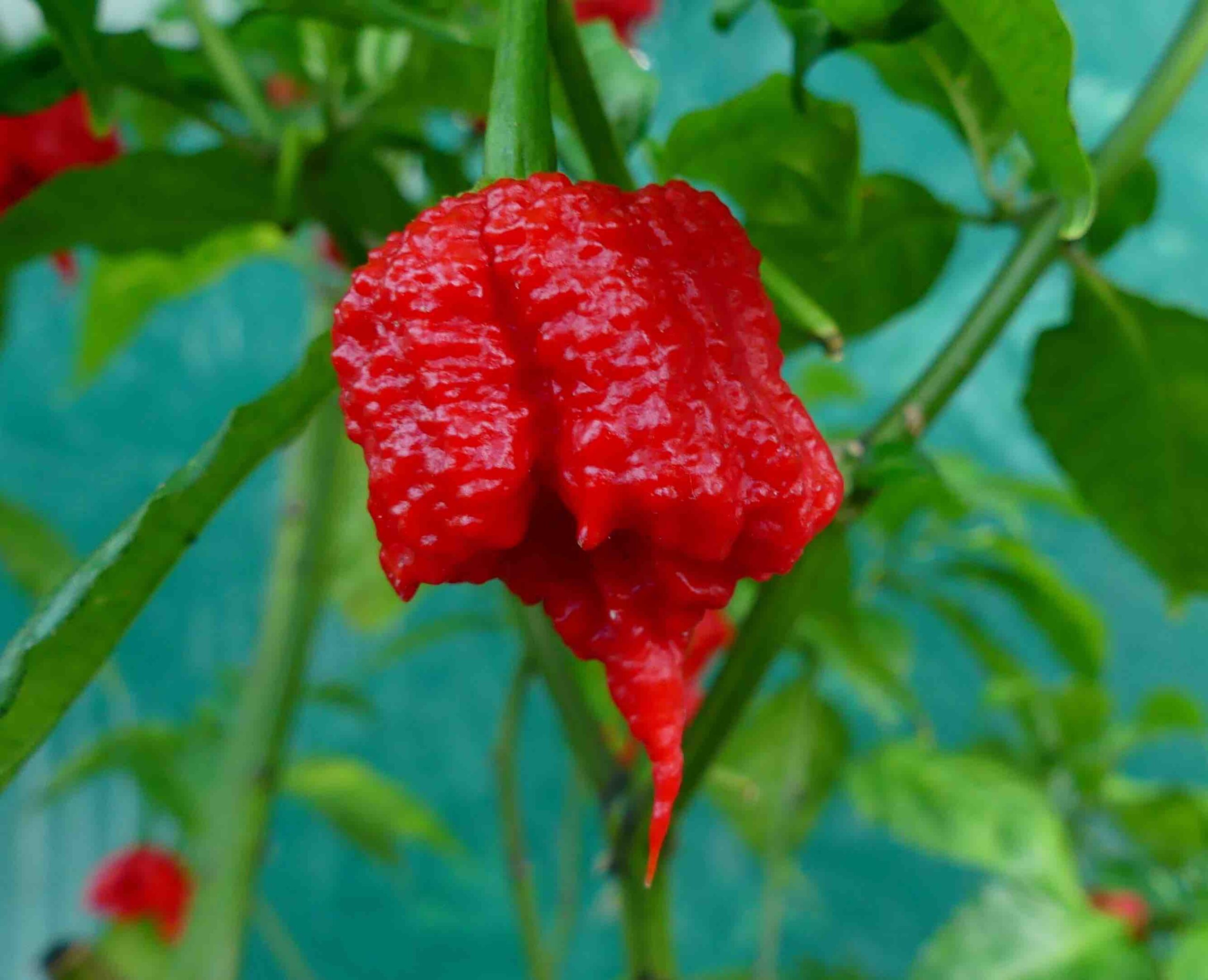 The hottest chilli peppers on the planet

The title for “the hottest chilli pepper” is something that is challenged more often than you may expect. Every year, hot pepper cultivators find a new mix of hybrid, soil, and temperature to create peppers that will combat for the top position. The competition is fierce. The Guinness Book Of World Records are the official adjudicators and have a grading system in place which is based on the potential peak heat of the pepper, via their total ‘Scoville Heat Units’ – referred to as (SHU). Scoville heat units, are simply a measurement of the number of times capsaicin needs to be diluted by sugar-water. The number of Scoville Heat Units in a pepper or even hot sauce indicates the amount of capsaicin present. The higher the Scoville rating, the hotter the pepper.

To give this measurement some meaning, consider that a general jalapeño pepper carries a SHU of around 2500 to 5000 units whilst the once hot pepper champ The Ghost Pepper carries a measurement of around 1,000,000 units! It really says a lot about the competition today when The Ghost Pepper is only ranked at number 15 in the world. As of this year the top 5 ranked hot chilli peppers of the world are as follows, but one word of caution first. Let the names of these chilies – like Scorpion and Reaper –  be a warning. These peppers are hot beyond all comprehension, and, as such, they must be handled carefully and with respect. If you’re going to dance with the devil, wear kitchen gloves, eye goggles, and take great care throughout the cooking process. .
At number 5 we have the ‘Dorset Naga’ with a rating of 1,000,000 to 1,598,227 Scoville heat units.
The Dorset Naga was developed by choosing the seeds of the best possible Naga Morich chillies, creating a popular pepper in itself with a little extra heat.
At number 4 we have the ‘7 Pot Douglah’ with a rating of 923,889 to 1,853,986 Scoville heat units
This is not your typical 7 Pot pepper. It ages to a chocolate-brown and has more of a sweet and nutty flavour than fruity.
At number 3 we have the ‘Trinidad Moruga Scorpion’ with a rating of 1,200,000 to 2,000,000 Scoville heat units
Sporting a killer name, the Trinidad Moruga Scorpion is from Trinidad and Tobago and gets its name from its scorpion-like “tail” that looks like the stinger of, you guessed it, a scorpion. Its heat at its potential peak can be hotter than many pepper sprays.
At number 2 we have the ‘Komodo Dragon Pepper’ with a rating of 1,400,000 to 2,200,000 Scoville heat units
The Komodo Dragon has face melting spiciness. There’s a sneaky sweet heat to this super-hot pepper – like the ghost pepper it’s a slow burn that doesn’t hit you upon the first bite, but builds over time into a firestorm. Interestingly, the Komodo Dragon chili is unique in the fact that it has found its way into a major supermarket’s store shelves. It’s sold at various TESCO stores in the United Kingdom.
At number 1 we have the ‘Carolina Reaper’, the hottest chilli pepper in the world today with a rating of 1,500,000 to 2,300,000 Scoville heat units
As of November 2013, the aptly named  Carolina Reaper has been the Guinness Book of World Record’s official hottest pepper in the world. It’s a United States hot pepper variety from South Carolina. The Carolina Reaper has a fruitiness to it, and the PuckerButt Pepper Company (the growers behind the Reaper) have grown it to be a super-hot that doesn’t skimp on overall flavour. That is if you can handle the heat, and that’s a big ‘if’!

Within our website you should find most of the information you need but if you are interested in finding out more about the magazine and how it can help to promote your business, please do let us know. We would be delighted to meet with you over a coffee to discuss the advertising rates and editorial opportunities within the magazine.